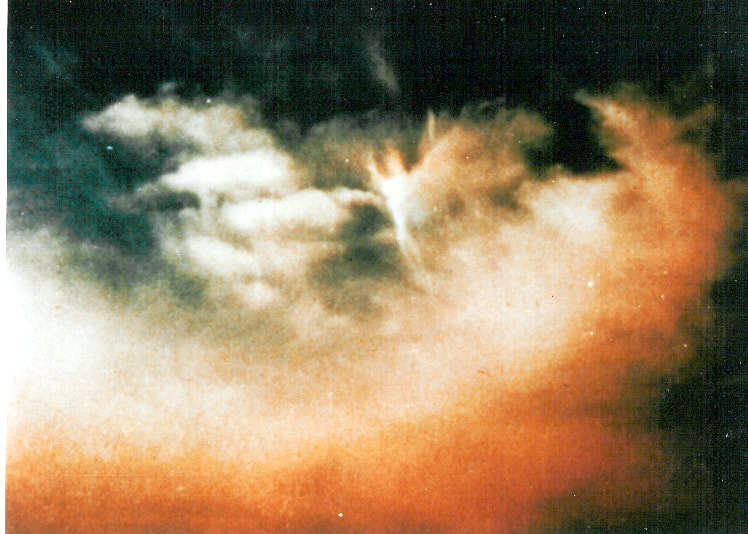 This photo taken April 23, 1995 Oklahoma City, Oklahoma, USA is merely a representation of the heavenly hosts watching over us.

In April 1981, spring did not arrive as early in Spokane, Washington, as it did in the Willamette Valley of Oregon. There were still lingering remains of winter snow sporadically spread around the valley like powdered sugar on French toast. The air was dry and cold under the expanse of the cerulean blue sky. The children and I had just moved to the area and were adjusting to many new things including a new preschool for my two youngest children, a new elementary school for my oldest son as well as new employment for me.

The ink-black cosmos canopied above was sprinkled with thousands of heaven’s little white night lights, when I awoke to an eerie cold draft around my shoulders. Sitting up, slowly I looked around the downstairs family room, which served as my bedroom in the small duplex we were renting. Then I noticed the front door was wide open.

“Why is the front door open?” I mumbled to myself still groggy with sleep. Reluctantly as I was rolling out of the heated waterbed to close the door, the phone rang a chilling sound in the night. Reaching over to the nightstand, I answered it.

“Are you all right?” the distraught voice inquired.

“Yes, I think so,” I responded with uncertainty in my voice. “Hold on, I need to close the door, it is freezing in here. I’ll be right back.”

Janie, the neighbor across the culdesac, who rose very early every morning, noticed that our front door was wide open and had called to check on us. She graciously befriended us when we moved in a couple of weeks previous.

As a new and very inexperienced single parent, I was learning to ignore most of my fears – like sleeping alone. My heart pounded in rhythmic panic as I gingerly walked up the mocha-colored carpeted split-stairway and stopped dead in my tracks.

A HUGE ANGEL filled the doorway (Exodus 23:20). Completely surprised and overwhelmed at the space He consumed, I was speechless. Stunned speechless. Shocked speechless. After an eternity of heartbeats, yet in reality only a moment or two had passed, taking a couple of very deep breaths, I regained some semblance of composure (Matthew 4:6).

Standing barefoot in a hot pink, below the knee-length cotton nightshirt, I casually smiled and said, “Hi, who are you?” as if I was greeting a door-to-door salesman.

His deep powerful confident voice resonated, “I’m Michael, I am watching over you.”

Laughing nervously, I remarked, “Well, that is good because we obviously need it.” He did not move or respond, so I took a deep breath, sobered some and humbly offered, “Thank you. Truly, Thank you.”

Michael whispered with a smile in his voice, “You are welcome,” and then he immediately disappeared from my sight.

Shaking my head in disbelief, I slowly closed the door and walked down the stairs to the waiting phone, thinking to myself, “Jennifer, you are losing it. You must be going over the edge.”

“An Angel! Get a Grip!” I muttered as I picked up the receiver laying on the nightstand.

“Who was that?” the voice on the phone demanded.

“Who was who?” I responded as though nothing had happened.

“The guy you were talking to, you know, the big guy.”

“Promise me you’ll call me,” the voice of my neighbor pleaded.

After hanging up the phone, I went upstairs to check on the children who were all sleeping soundly. After making sure the sliding glass door was locked upstairs and re-checking the front door, I returned to the warmth of the heated waterbed.

“An angel,” I thought out loud.  Asking myself questions as I often do, “Mmmmmmm, Jennifer, what do you think about that?” After pondering for a few moments, there seemed to be an urgency to record the details for later. Slowly, I pulled my journal from the shelf above the bed and picked up the pen on the nightstand. Looking at the blank page, these words crossed my lips, “Imagine that! An angel, face-to-face, up close and personal.”

The encounter was awesome and overwhelming, just to think God cared about me enough to send an angel to watch over us. There was a deep place in my soul that tenderly embraced the sacred comfort of it all. This is a vast understatement in comparison to the extreme intense feelings, which shook my internal being. I had just met an angel who was at least seven feet tall and as wide as the doorway. His crystal ice-blue eyes were full of comfort, strength and peace. Even though he was huge, I did not feel any fear. It was as though Michael was just hanging in the early morning air as he did not seem to be touching anything not the doorway or the step.

The tunic-style garment was like a muted soft glowing light, gently but intentionally permeating the darkness, with a golden-white belt made of twisted rope knotted around his waist. Although the tunic had the essence of fabric, it seemed to have an unusual quality that was unfamiliar to the bolts of fabric that lined the walls in the local fabric stores. A huge silver-handled sword hung at his side, hidden mostly by the folds of his robe.

…the feeling of complete safety enveloped me as I dozed back to sleep.

This Angel encounter was a huge surprise to me! At the time of the angel encounter I was thirty years old with three young children aged 3, 4 and 6. From the time of my birth until I was 10 years old, I attended the First Baptist Church in Springfield, Oregon. After we moved to the Pleasant Hill area, I attended Trent Church of Christ (Disciples of Christ) until graduating from High School. During this time, both of these denominations were rather conservative in nature. I did not grow up in the charismatic movement nor attend churches that taught about angelic visitations, speaking in tongues, heavenly translations, supernatural healing and/or other spiritual phenomenon. For further Scripture Study on angels see: Psalms 91:11, 103:20; Matthew 1:20, 16:27, 18:10, 24:3, 28:2; Mark 8:38; Luke 1:30, 2:9, 2:13, 15:10, 20:36; Acts 5:19, 12:10-11; Colossians 2:19; Hebrews 1:7,14; Revelation 18:1.

The photo above: Fourteen years later, in the late spring of 1995, my dear friend, Miss Versie Hudson called and said, "Jennifer, you have got to come over and see this!" So, I dropped by her home after work to see the above photo. I asked Miss Versie, to contact her niece that took the photo and borrow the negative. So, she did and a few weeks later the negative arrived in the mail. I had two large prints made, some small prints made and returned the photo negative to Miss Versie, who returned it to her niece in Oklahoma. Miss Versie's niece went to the site of the Oklahoma Bombing 4 days after the disaster to take photos with her Brownie 110 camera. This photo was returned among the thread of negatives. Although unaware of the angelic hosts hovering above her...God made sure that she and others knew HE was watching over Oklahoma City.
For He will give His angels charge concerning you, ​to guard you in all your ways. Psalm 91:11