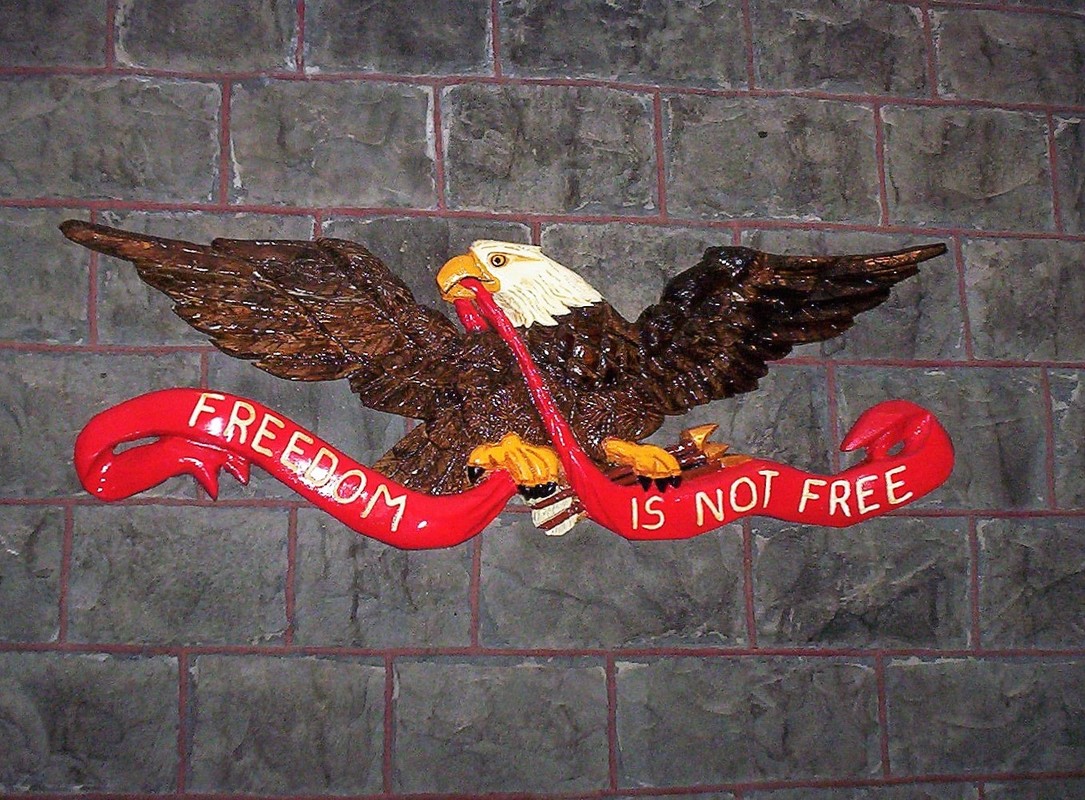 March 26, 2004, Friday ~ Rain pelted the windshield the entire drive to Seaside, Oregon where I met Shane, DD and their family.

Shane has been in the National Guard for twenty-nine years and they invited me to Camp Rilea, the Oregon National Guard Base for Air and Army located along the Oregon Lewis and Clark Trail. This is my very first experience on a military training base and I am beyond excited...as we are in a season of change, new beginnings and crossing over.

As we turned left onto the driveway to the base, to the south nestled on the hill is a small brick Presbyterian Church with a huge yellow cross, designed with hundreds of brighter than sunshine yellow daffodil blossoms prepared for Palm Sunday. It was more than a Welcome Home sign from GOD to me as I affectionately remembered the cross of roses from my childhood baptismal service. As we entered the base, there were many yellow ribbons embracing the tree trunks and signs proclaiming: Welcome Home B/52 Engineers. Later in the weekend I learned that B is for Bravo and B/52 is the name of a unit on base.

After passing through the security gate I paused to read the entry sign: 2004 AG Shooters Match.  AG is not the acronym for Assembly of God Churches - it is for the General who is sponsoring the Match...smiles.

Sometimes GOD's humor is simply beyond comprehension...when I turned 52 last year...it was prophesied to me that I was like a B-52 Bomber in GOD's air patrol. Delightfully I learned that the B-52 Bombers had been fully redesigned interior and exterior to be less cumbersome and more effective and efficient since WWII! Glory to GOD! Last month, in my recent journey to Arizona, my mom gave me a Black Leather Bomber Jacket for my birthday this year...little did she know that GOD was up to something!

We took a brief tour of the base stopping at a little commissary where I found four postcards:
1. Fire Power
2. Fire Support
3. F-15 Eagle
4. 7 Fighter Planes.

Then we continued our tour and I noted the General's house was on Oregon Street and the Lt. Colonel's Hilltop House was on Pacific Avenue where the State of Oregon Seal is located. Pacific means a place of peace, mild, tranquil, calm and not warlike. Yes, of course, I poured out HIS Glory Abundant Overflowing! Holy Anointing Oil and prayed for these leaders. The personal significance to me is that I lived on 590 Pacific Avenue in Springfield, Oregon in the first years of my life 1952-1958 and I am a fourth generation native Oregonian.

In the evening, while waiting for soldiers to arrive the Lt. Colonel and the Major graciously taught me to fire a 9M Beretta - my very first time to shoot a weapon except a water gun as a child. They were kind and even somewhat impressed with my 95% accuracy which they attributed to beginner’s luck. There is something to be said for hitting the target...a certain feeling of victory! The soldiers on this military base generously gave this first time visitor the feeling of belonging to a very huge family where everyone watches out for each other.

The insignia for a Major is a gold tree of life and for a Lt. Colonel is a silver tree of life. Acts 3:6 immediately came to mind, “But Peter said, ‘I do not possess silver and gold, but what I do have, I give to you: In the name of Jesus Christ the Nazarene - walk!’” May GOD release HIS supernatural healing to all American military families.

During the weekend several re-enactment groups were on the base, therefore we were privileged to see men in Civil War, American and British WWII uniforms. Additionally, there were authentic hand-held weapons from the Civil War and WWII. What captured my attention the most were the large lumbering canons from the Civil War.

The men warmly invited us to tour their bunkhouses and generously allowed us to inspect the different types of weapons. It just about undid me when a young man walked up to me wearing a WWII Army uniform - exactly like the one my Dad would have worn. Since WWII and the Civil war were over a long time ago, I asked one of the guys, "Why do you do this?" His answer was simple, but profound...."to honor those who gave their lives." Silently I pondered if I was living a life bringing honor to YESHUA who gave HIS life for me.

March 27, 2004, Saturday ~ During the morning, a military helicopter brought the General to the base - we were all honored by his presence. The matchless rain of fire continued throughout the day under a shield of iron gray clouds.

On Saturday afternoon, during the Shooter’s Match, which was exclusively for military, DD and I, along with her two children, went to the beach where Karl, age 10 and I explored the Wreck of Peter Iredale near Fort Stevens, along the panoramic Oregon coast.

After returning to Camp Rilea, the Major gave me a more comprehensive tour kindly answering a thousand questions from the rookie. Then we joined the many uniformed soldiers in the mess hall for dinner. Upon entering the mess hall, immediately to the right was a small table covered with a MIA-POW flag, a WWII Army tin cup, silverware and a tray filled with food. My eyes immediately filled with tears when I asked, "What does this symbolize?" The soldier at the door explained, “The first meal is served to those missing in action and prisoners of war." Tears spilled from my eyes as I remembered the names of so many guys that I went to high school. The Vietnam War took too many of America's best.

At the base restaurant, the red banner under the American Bald Eagle sign on the fireplace expressed it best:  FREEDOM IS NOT FREE!

As I am Biblical Christian, I believe YESHUA, Our Messiah paid the ultimate price with HIS death, resurrection and ascension!

"So Jesus was saying to those Jews who had believed Him, "If you continue in My word, then you are truly disciples of Mine; and you will know the truth, and the truth will make you free" (John 8:31-32).

As an American citizen living in a Democratic Republic, countless have paid the price! Do we really live as though their sacrifice made any difference?
He has told you, O man, what is good; and what does the LORD require of you but to do justice, to love kindness, and to walk humbly with your God? Micah 6:8