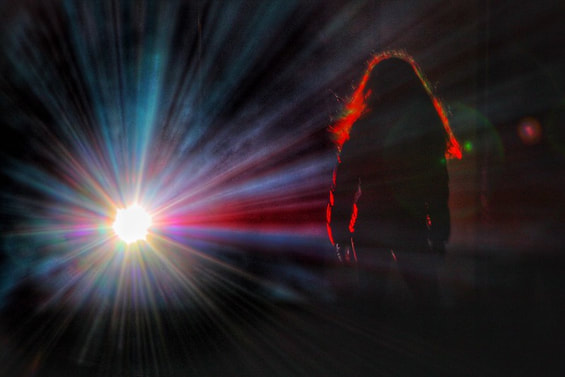 Then Moses said to the sons of Israel, “See, the LORD has called by name Bezalel the son of Uri, the son of Hur, of the tribe of Judah. And He has filled him with the Spirit of God, in wisdom, in understanding and in knowledge and in all  craftsmanship; to make designs for working in gold and in silver and in bronze, and in the cutting of stones for settings and in the carving of wood, so as to perform in every inventive work. He also has put in his heart to teach, both he and Oholiab, the son of Ahisamach, of the tribe of Dan. He has filled them with skill to perform every work of an engraver and of a designer and of an embroiderer, in blue and in purple and in scarlet material, and in fine linen, and of a weaver, as performers of every work and makers of designs" (Exodus 35:30-35).

At 3:00 AM the Holy Spirit of the Most High God abruptly awakened me. As I lay awake on my back, I began levitating up into the air about 12” above the bed. My body remained horizontal. I inquired of the LORD, “What is this about?” There was no answer. My body hung in the air for a few minutes then it returned to the bed the way that it came. I did not know what to think. Being levitated was not something that I imagined to be in the realm of possibility. I thought perhaps angels were lifting me up but I was not certain. It was a completely new experience. I have learned to trust God in the millions of things I do not cognitively understand.

At work, a few hours later, my supervisor, Kendall said first thing in the morning, that he needed to meet with me, that it was very urgent. This caused for mild trepidation, as it was not like his normal calm demeanor. Immediately, I went into his office and he closed the door, which he did not normally do if he was giving me direction for a project.

"I awoke about 3:00 AM and the LORD gave me this vision. It began with you walking down a narrow path that emerged into an open wide field. Then you walked out into the center of the field and stood waiting upon GOD with arms outstretched to the heavens. You were all alone. You were wearing old, thin, tarnished, dented armor.
Then suddenly, white lights from all different directions began hitting you. At first, I thought it was lightning, but then I realized it was just light, iridescent, blinding light. It was as though the light was being fitted to you.
As you looked up, different components of new armor materialized in the heavens. These pieces flew down like lightning bolts out of heaven and bonded with your body one by one. As each one bonded there was a loud metallic sound like a heavy door closing or metal being forged. The new armor was very different from the old. It was 2 inches thick, very highly polished with and impenetrable “high tech” appearance. When all was done, your entire body was covered…very formidable indeed! The old armor lay on the ground in a heap next to you."

Kendall Saville, Hillsboro, Oregon, USA
“As for God, His way is blameless; The word of the LORD is tested; He is a shield to all who take refuge in Him"
​ (2 Samuel 22:21, NASB).