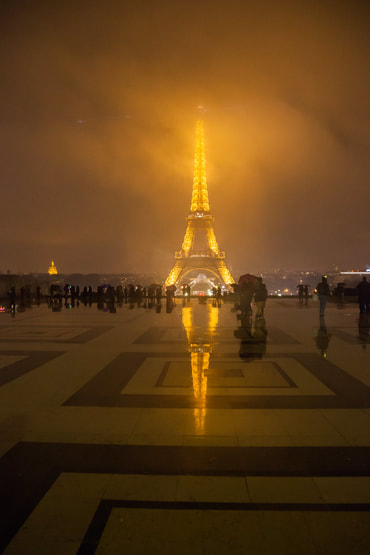 The Glory Ring finally arrived (my luggage was lost for nearly three days) and just in time to be given to the one God ordained.

I was introduced to Pastor Marc and his wife, Annemarie Le Brun, ministers at "Christ Light of the Nations", in Cergy, a suburb of Paris. They were happy to receive the Prophetic Worship Glory Ring and said that they had a prophetic worship dancer on the pastoral staff to whom it will go. She is an African woman named, "Edwige" who is apparently a trained dancer.

I used 15 vials of Anointing Oil!

Here are the sites I anointed in order...
1. Christ Light of the Nations Church - Cergy
2. Cergy - Prefecture Train Station
3. Place de Matroi Jude (the place of the martyred Jews) - Paris
4. Port of Autonome - Paris
5. The Four Pillars - (North, East, South and West) of the Eiffel Tower - Paris
6. The Oblisque (the monument erected by Napoleon, imported from Egypt in worship of reason and the place where Marie Antoinette and Louis the XVI were beheaded) - Paris
7. City Hall - Paris
8. Notre Dame - Paris
9. - Versailles - The War Room/Hall of Mirrors/Grounds
​10. Orleans - Hotel De Paris (this hotel is over 100 years old and is the only building that was left standing in this section of Orleans in WWII after the Americans bombed and liberated it. The Germans had occupied Orleans. It stands on the Rue de Bannier which was the gateway from Orleans to Paris in the time of Jeanne D'Arc.
11. George V Bridge - Orleans (the oldest bridge rebuilt at the site of the original bridge which in the time of Jeanne D'Arc was the only crossing point over the Loire River. The Loire River is the longest river in France and the most unpredictable. The bridge connected the north and south of France. In the center of the bridge along the east side is a sculpture built overlooking the river of a huge crown...this was anointed twice with oil.
12. Orleans - The original "siege point." This is the point of origin of the original bridge, the remnant and ruins of it. It is the place where Jeanne D'Arc (Joan of Arc) began her siege against the British in Orleans and her victory turned the tide of the hundred years war giving France her freedom.
13. Place De Martroi - Orleans. This is the center of town with a humongous state of Joan of Arc on the place where many were martyred for faith. Below ground (directly below the statue) we discovered the ruins of the "original gate" to Paris called the "Port De Bannier." Orleans is the bridge between north and south and there are gateways...huge stone arch ways which lead to Paris or other cities. This was the "grain gate" where those who buy and sell grain would come and go in the city.
14. Two large dry fountains on either side of the Place de Martroi - Orleans.
15. Large Calvinist Temple - Orleans (hinges and door and dry fountain in the front)
16. The Desert de Cevannes, Anduz, France - The place where the Huguenots (Protestants) fled from the Catholic persecutors.
17. Anduz Hugeunot Temple, (Methodist church. Only Catholic Churches are called churches in France. Protestant Churches must be called Temples).
18. Centre Languedoc Evangel - Charismatic Church in Montpellier (anointed the hinges and front doors).
19. The Mediterranean Sea is the most southern part of France
20. The Seine River, Paris

Well, I had no idea there were twenty.

I am so grateful for your prayers and your participation.
k

Ingredients:
1. Juniper – A fragrant oil from the cedar family.  Prophetically speaks of the glory of Lebanon coming to GOD’s people. The juniper tree represents GOD’s protection and provision for His Word through His prophets ~ 1 Kings 19: 4-8.
2. Sandalwood –  A fragrant oil from a tree in India.  When the tree matures, the central harder wood acquires a yellow color, which represents revelatory knowledge and joy and a beautiful sweet fragrance.  The softer exterior remains white, the color symbolizing purity, representing the humility and purity that will be requisite to hold the revelation and joy of The LORD in the fullness of His measure.
3. Jasmine – A member of the olive tree family.  The oil is rare and expensive.  Blossoms must be harvested in vast quantities at night when the scent is at its peak, and produces only a few drops of exquisite perfume.  Prophetically, represents the exquisite fragrance of GOD’s saints as they keep the night watch, willing to spend vast quantities of time to pray and petition GOD on behalf of someone or something.  This produces the “Joy of The Lord” in the LORD.
4. Mulberry  - This tree was used by GOD supernaturally to bring victory to David over the Philistines ~ 2 Samuel 5:24. Prophetically, represents GOD’s victory in our lives when we seek HIS Glory above any other glory, especially our own.
5. Green Tea – Represents the healing of the nations:  The healing is in the leaves.
6. Ginger Lily – Represents the Joy of The LORD.  The flower is yellow symbolizing joy, victory, deliverance and the lily is shaped like a horn – the Horn of our strength is YESHUA! It is also a reference to the Feast of Trumpets.
7. Rose – Represents the Rose of Sharon – Our Savior, YESHUA!
8. Olive Oil – Represents the ceaseless flow of the Holy Spirit, and of course, the Jewish nation ~ Zechariah 4.

The overall sense I have for this year’s Holy Anointing Oil! is that GOD’s Glory is going to be more evident in the lives of HIS people this year than ever before, even in the days of Moses.  The Glory of the latter house is greater than the glory of the former house and this is the time of the latter rain (reign). (Haggai 2:9)

Joyce Breazeale, Lebanon, Tennessee, HGRM Advisor
“I will open rivers on the bare heights and springs in the midst of the valleys;
I will make the wilderness a pool of water and the dry land fountains of water"
​(Isaiah 41:18, NASB).