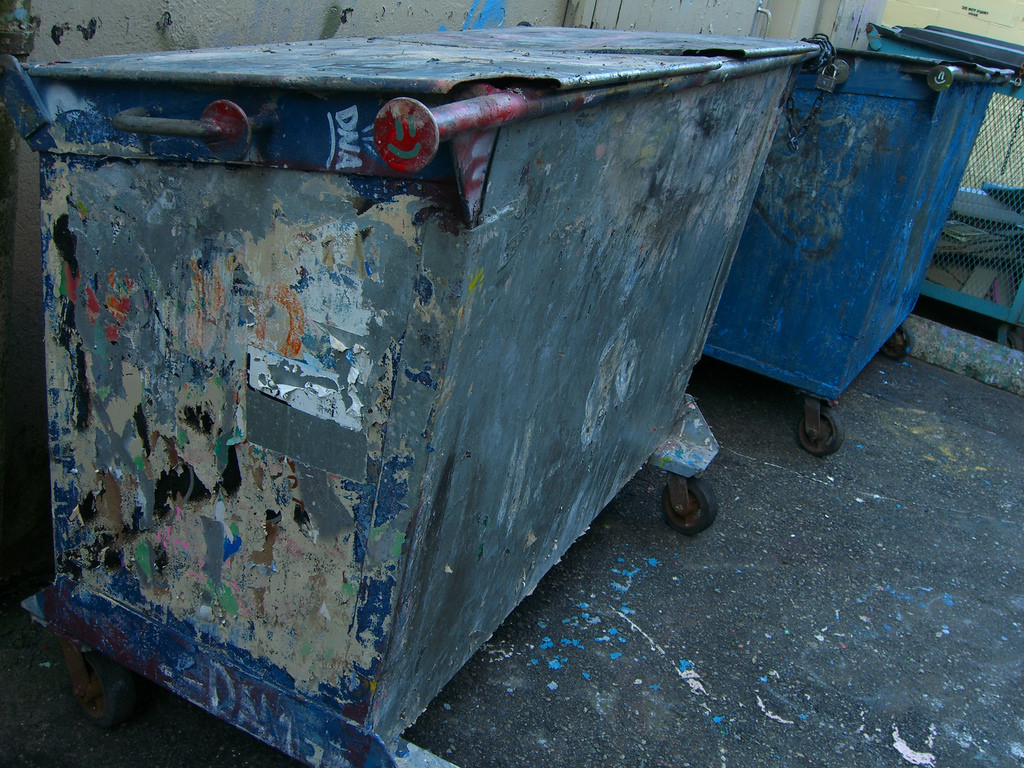 Invited to a spicy summer BBQ, the rare social encounter was a much-needed interlude in my multi-task-oriented schedule.

The hot, August muggy air slapped me like a wet rag as I left the confines of the tiny one-bedroom apartment. Quickly crossing the steaming black asphalt parking lot to my car, my senses reeled with the horrifying stench of the garbage dumpster over heated by the afternoon sun. Gross! My stomach flipped at the repulsive odor. Quickly, I glanced at the ugly green monster dumpster as I hurried to the car. In this season, it was my lot in life to walk by the green monster as it was stationed in the center of the small apartment complex parking lot.

Gratefully, I retreated to the air-conditioned car and the Holy Spirit spoke to me very clearly. Honestly, I thought I must be having a heat flash or something. But GOD you cannot be serious!  I proclaimed loudly. Yet, knowing HIS voice, I turned off the car’s engine, reluctantly got out of the car and trudged to the green metal container enclosed by the tall cedar fence.

Staring at the items, I mentally processed the request. The Holy Spirit asked me to pick them up and take them into the apartment. Casually, I looked around to make sure no one was watching, as I thought this might be considered stealing-not to mention how completely and totally embarrassed I was!

After setting the items down on the kitchen counter, I just waited a couple of minutes to hear from the LORD. Mmmmmmm. I pondered HIS words, Take the game-boy toy to the BBQ. Well, that did not make any sense at all and it was completely illogical since the friends offering the invitation did not have any young children.

About an hour later, I arrived at the BBQ. My friends had some unexpected company drop by from another city. Sitting in front of the TV was a young boy, about 8-years old very focused on the video game he was playing. Mmmmmmmmm, I thought…GOD what are YOU up to?

So, I went out to the car and brought the computer toy in and handed it to the boy and said, “I believe that GOD wants you to have this.”  His chocolate brown eyes glanced towards me, then at the toy in his hand, then at me again, then remained fixed on the computer toy in his hand for some time. Then he looked at his Mom. This was one of those moments when silence was truly golden.

Still with his eyes fixed on the toy in his hand, he slowly got up with his face covered in a mixture of surprise and unbelief and took the toy to his Mom. Tears welled up in her eyes. Silently, I am wondering even more what GOD is doing.

Finally she explained, “We were at a toy store yesterday, in the town where they live about five hours away, and my son, David, wanted this exact hand-held computer toy." She had her arm around David as she talked. "I did not have any money, so we prayed and asked GOD to bring it to him.”

That would be my ABBA ADONAI!

As usual GOD was making it very clear to me that it was not about the disgusting dumpster or about me. It was about a little boy’s prayer that HE was intent on answering.

That was the first of the Green Dumpster miracles that the LORD produced in the next five months. The additional items included a slide rule, a new Strong’s Exhaustive Concordance still in the plastic wrap, five new bedspreads of varying sizes, two women's jackets, a bag of new clothes and a small child’s toy. Each one was an answer to someone’s prayer, a surprise and a miracle blessing of GOD. Each article was placed in bags or boxes next to the dumpster at seemingly the exact moment GOD designed for me to walk by. Could it be possible that God would actually camouflage a dumpster with the spirit of a season of giving, a season of signs, wonders and miracles?

Often, we hear Christians pray, “Please GOD send me! Use me!” And then HE asks us to do: the unthinkable, the unbearable, the humiliating and the degrading: Be a Dumpster Queen!

Gratefully for me, the season of dumpsters has come and gone, but the lesson learned is forever etched in my spirit. GOD takes us at our word when we say, “YES, GOD! Anything, I’ll do anything for YOU!” HE believes us. Each time HE asked me to go to the familiar green metal container I truly struggled with the means of HIS provision. And no, this is not a recommendation to begin searching dumpsters or garbage pits at all!

HIS ways are higher than our ways! We do not have to understand HIS ways to walk in obedience to HIM!

For the Eternal Glory of ELOHIM!
“For as the heavens are higher than the earth, so are my ways higher than your ways, and My thoughts than your thoughts.” Isaiah 55:9