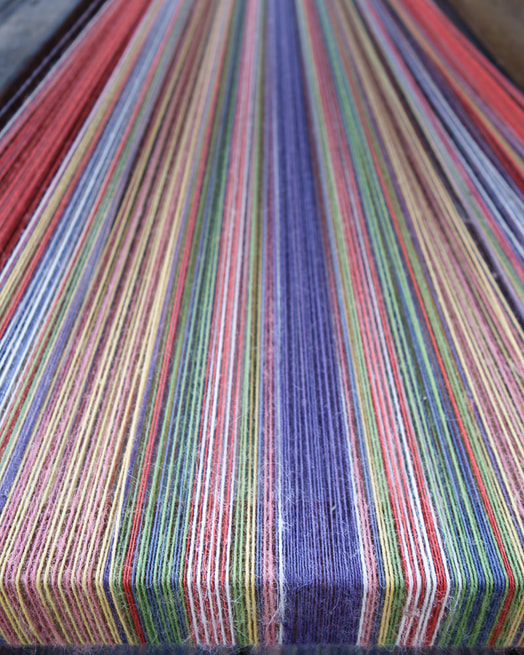 Gently, I awakened to the rhythmic sounds of the shuttles divine movement of heaven’s loom. It was an awakening to a sound like no other. It was a different sound, a new sound, perhaps a cosmic reverberation or syncopation. The harmony stretched across the universe pulling taut the instruments’ strings. Slowly my eyes fluttered open to the unfamiliar melody. At first, I thought perhaps it was an ancient drum or a native ebb and flow from distant shores. Then I fully opened my eyes and there HE was at the loom. Intuitively I knew this encounter was to be a rare, priceless gift. A moment to transfer from earth’s dimension to heaven’s realm and watch my KING YESHUA! A single effortless turning to shed the weight of earth and embrace the timeless grace of HIS Eternal Kingdom.
HE scooted over on the ornate antique cypress wood bench… (At first I wondered if he made it, then I laughed silently as I knew that of course HE had made it) and motioned for me to sit next to HIM. It was clearly a KING’s bench, yet also the place of a servant. I did not hesitate.

While on earth YESHUA was a carpenter, as was my Dad, therefore, I was acquainted with the sounds of the hammer, the file, the saw and other carpentry tools. The deep blended fragrances of pine, fir, acacia, cedar, myrtle, cypress and other trees were also common to me.

However, this place carried the heavy fragrances of an antique yarn shop or ancient mercantile. I had not been here before. The sounds and the fragrances were acutely new, unknown and unfamiliar. Circling the expansive borders of the room were baskets of yarn, threads, woven garments, fabrics, cording, lace, buttons, adornments…a place those of the creative arts only dream about. The walls were aged polished wood…perhaps Manzanita as the colors indicated the possibility…yet perhaps it is not possible to know fully where the Carpenter acquired the pieces of wood so artfully and seamlessly fitted together.

HE did not seem out of place, yet, I could not find my familiar place with HIM.

HIS hands held the various threads deftly as HE maneuvered effortlessly through the different motions of weaving, a completely foreign language to me. As there are over 7000 spoken languages on the earth and I can barely navigate one, I wonder how simple I must seem to HIM, yet, I always feel so highly valued, cherished, esteemed, accepted and overtly loved in HIS presence. HE has invited me to this place to learn and understand a new language called weaving. The languages that HE has already taught me such as sounds, colors, symbols, types and numbers will be of great benefit in this place. I am grateful that HE took the time to prepare me for this season. It is so like HIM to go before me and prepare the way. Teaching, imparting, revealing, and giving generously all that I will need to walk side-by-side with HIM, as HE walks in obedience to HIS FATHER, ABBA ADONAI.

Silently, I watched HIS movements for a while as HE would carefully, intentionally choose a thread, weave a thread, blend a thread, and lift a thread in the soothing motions of soft music like a seasoned conductor orchestrating a grand symphony. Each movement meant something in a greater sphere, a greater dimension…I could see each color, each type of thread, the numbers of threads, the consistency of the threads, and the blending of the threads were a language unto themselves, yet as ONE. I thought about the “Great Dance” of the Father, Son and the Holy Spirit…and I could see this was similar only in fabric, texture, color, movement, blending and positioning. If a thread seemed too thin, too fragile, too sparse, then HE would take another thread, and roll them together between HIS fingers, making them one: A strong, united, unbroken thread.  There were countless spools of threads to choose from in every imaginable hue, texture, width and design. I was completely fascinated at the way HE chose a single raw silk thread from Japan, a refined silk thread from China, a colorfully died cotton thread from South America, an exquisite thread of French lace, a rough thread of a Scottish Tartan and blended them together as one. Although I could not see the pattern clearly because I was too close, I was sure the completed design would reveal HIS FATHER’s Kingdom destiny, purposes, plans, presence, providence, desires, pleasures, seasons, times, revelations and hopes.

I am comforted by HIS presence and content to observe without conversation or any verbal offering in the grandiose style of my typical avalanche of questions. My eyes navigated the room like one visiting an art gallery…truly too much beauty to behold. It was much more than a cup of beauty. It was like a waterfall out pouring of deep passion, countless colors, vibrant textures and creative wealth. I noticed a thick luxurious yarn that is the color of blueberries and milky cream and another braided thread combining the colors of pomegranates, cherries and plums. Then my eyes riveted to tiny silk ribbons in the colors of mangos, lemons and limes.  Such deep, deep beauty…a sonata of touchable textures. A rhapsody of light patterns reflecting majestically all the colors of the spectrum.

Glancing back towards the MASTER, I noticed that HE moved a basket near HIS feet out into the open space. HE looked through the remnants carefully and selected a rather fragile piece of seemingly ordinary string. Smiling with HIS eyes, HE weaved the ordinary string among some extraordinary threads. I am captivated. I am overwhelmed.

Then HE stopped, turned towards me and spoke HIS first words to me during this time, “Your turn.” HE placed the threads in my hands, with HIS hands over mine and HE taught me the movements of weaving in the same way that HE taught me how to make any Prophetic Worship Instrument over the last 18 years. Each Worship Instrument whether it is a Prophetic hammer, sword, streamer, scepter, flag or Glory Ring is always about a singular purpose, to create a song in color, type and symbol to Glorify YESHUA. I am grateful we have been doing this for many years as I am very comfortable being HIS student and there is no other person from whom I would rather learn. Even though my hands are following HIS hands, it is HE who is creating the multi-faceted design of the Tapestry. We work together for a while until HE is certain that I am confident in what I have learned. I realize HE has allowed me to learn on HIS Tapestry, HIS masterpiece, HIS work of art…not my own “beginner’s piece”. I am humbled by this realization. Undone. I find myself without a single word. My eyes spill over with emotion.

The atmosphere shifts as I sense that the time is closing. Perhaps for the first time I have asked no questions, made no inquiries, and I have asked for nothing because certainly being invited into the KING’s Presence is more than enough. I know to wait before HIM for the fullness of HIS revelation. Gratefully, I have once again found my familiar place with HIM.
​
…It was an awakening to a sound like no other. It was a different sound, a new sound, perhaps a cosmic reverberation or syncopation. The harmony stretched across the universe pulling taut the instruments’ strings. Slowly my eyes fluttered open to the unfamiliar melody.

December 31, 2014
“You shall make a veil of blue and purple and scarlet material and fine twisted linen; it shall be made with cherubim, the work of a skillful workman" (Exodus 26:31, NASB).