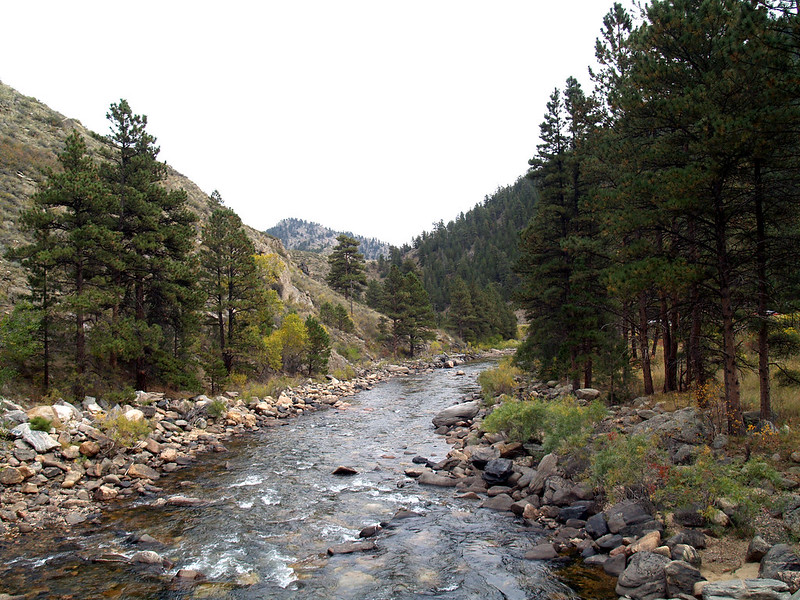 The day before I left for the trip, Paula called to tell me the Tibetan Monks were going to be in Fort Collins over the weekend to do a sand mandala. So....that day before our session, I went to three different points of the Poudre River to pray and pour in HGRM Anointing Oil. The first park on the far west access of the river was called Lion's Park. I had not known that although I had been there a few times. Leslie's daughter, Destiny, had seen a "devouring lion" at her window the night before. THE LION OF THE TRIBE OF JUDAH REIGNS OVER FORT COLLINS!

On our trip, the Lord revealed to us the itinerary of the Tibetan Monks (in coffee houses). We were staying at strategic locations and arrived at them either just before or while they were in town so we were able to pray over the rivers and pour in Anointing Oil before they released their mandalas. The locations were: Fort Collins, Taos, Durango, and Pagosa Springs. Then, on our way home from Pagosa Springs on August 15, 2003 we unintentionally tuned into a radio program where they were interviewing one of the lead monks so we learned that they were in the US to raise money for their Monasteries in Tibet - needing more room. AND...when Paula and I drove to the Picuris Pueblo (south of Taos), the Buddhist colony that used to be on the county road near there (also near the Camino Real or "Royal Road", was now up for sale and they were gone. Kevin and I had passed that last summer and I had prayed for their removal. There was a sign on the bridge over the entrance that is was being used as some sort of summer sports camp for kids. Praise God!

We saw much answered prayed from a previous prayer journey in regard to redeeming the land which was VERY COOL OF GOD! Glory to HIM!

We used 23 bottles of HGRM Anointing Oil! Five were given away in the Four Corners Area and one in Dodge City, Kansas. The Rio Grande, the San Juan, and the Arkansas Rivers were anointed along the way with several smaller streams.

THE LORD IS GOOD AND HIS MERCY ENDURETH FOREVER!

Ingredients:
1) Juniper – A fragrant oil from the cedar family.  Prophetically speaks of the glory of Lebanon coming to GOD’s people. The juniper tree represents GOD’s protection and provision for His Word through His prophets (1 Kings 19: 4-8).
2) Sandalwood –  A fragrant oil from a tree in India.  When the tree matures, the central harder wood acquires a yellow color, which represents revelatory knowledge and joy and a beautiful sweet fragrance.  The softer exterior remains white, the color symbolizing purity, representing the humility and purity that will be requisite to hold the revelation and joy of The LORD in the fullness of His measure.
3) Jasmine – A member of the olive tree family.  The oil is rare and expensive.  Blossoms must be harvested in vast quantities at night when the scent is at its peak, and produces only a few drops of exquisite perfume.  Prophetically, represents the exquisite fragrance of GOD’s saints as they keep the night watch, willing to spend vast quantities of time to pray and petition GOD on behalf of someone or something.  This produces the “Joy of The Lord” in the LORD.
4) Mulberry  - This tree was used by GOD supernaturally to bring victory to David over the Philistines (2 Samuel 5:24). Prophetically, represents GOD’s victory in our lives when we seek HIS Glory above any other glory, especially our own.
5) Green Tea – Represents the healing of the nations: The healing is in the leaves.
6) Ginger Lily – Represents the Joy of The LORD.  The flower is yellow symbolizing joy, victory, deliverance and the lily is shaped like a horn – the Horn of our strength is YESHUA! It is also a reference to the Feast of Trumpets.
7) Rose – Represents the Rose of Sharon – Our Savior, YESHUA!
8) Olive Oil – Represents the ceaseless flow of the Holy Spirit, and of course, the Jewish nation, Israel (Zechariah 4).

The overall sense I have for this year’s Holy Anointing Oil is that GOD’s Glory is going to be more evident in the lives of HIS people this year than ever before, even in the days of Moses.  The Glory of the latter house is greater than the glory of the former house and this is the time of the latter rain (reign). (Haggai 2:9)