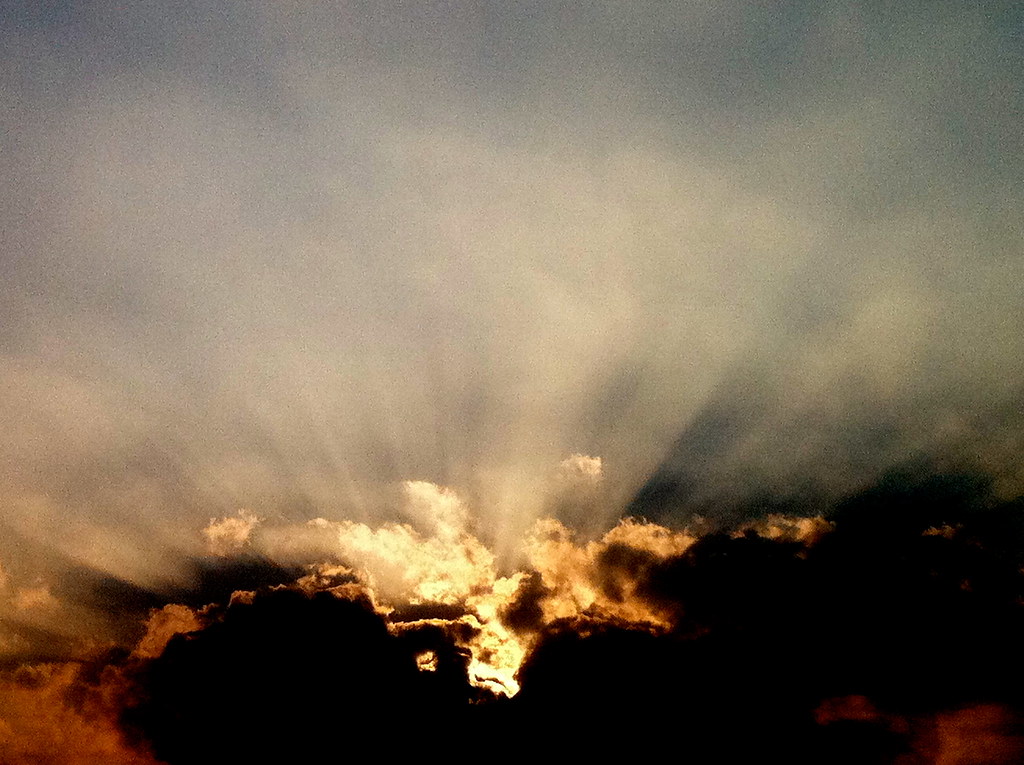 Cosmic Encounter ~ Oregon, USA
​
One evening in January 1980, during intercessory prayer, I begged God to please let me see my Grandfather again, thinking perhaps I could see him in a dream or a vision. I never expected the following to happen because I did not know it was possible.

Within the span of a few breaths I was translated ... which is defined as the process of moving something from one place to another ... to the heavenly realm, and I found myself walking along a softly illuminated path...as one treasured friend says, there are air stairs to Jesus. A single human form was sitting under a large sprawling tree to the right of the path. Transformed by the peaceful environment I could not feel any anxiety or stress, although these were common threads in the tapestry of my everyday life. Recognizing Jesus, my Savior, I hurried down the path to talk with HIM, even though hurry was not available in this place absent of the confinement of earthly time. Sitting down next to HIM, I began chattering about seeing my Grandfather, as I was absolutely certain this was the reason for my visit.

Calming me with HIS voice, He said, “Jennie, we have to talk about something first.”  Anxious to get it over with so I could see my Grandfather, I responded, “Okay, what?” The language there is not the language of the earth. It is the language of the Spirit. Immediately, I knew HIS feelings, HIS thoughts and HIS heart. Although words were not actually spoken, they were communicated. Deep, tender, true, kind eyes looked at me ... more like through me, “You are still angry with MY FATHER for bringing your Grandfather home.”

Without thinking, quickly I responded, “No, I am not.” Melting me with HIS pure love . . . I continued, “Well, of ALL the Grandfathers’ in the world, why did HE have to take mine? HE had the whole world to choose from, I only had one Bumpa. I was special to him. He loved me.”  Softly Jesus answered, “Yes, your Grandfather loves you and yes, you are special to him.” In my confusion and frustration, I retorted, “What good does it do me? He died 20 years ago. I need somebody that is alive to love me the way he did.”

Gently, He took my hand and waited for me to calm down to a place of listening to HIM. Then HE asked me if He could share something with me that I did not know. “Yes,” I whispered knowing that I desperately needed to hear what He had to say whether I wanted to or not. Throughout life I have found that it is usually what I do not know or have not yet learned that makes the difference and transforms most situations! The words of Jesus at this moment in time would transform my life in miraculous ways.

Immediately, my mind remembered visits to the hospital in Eugene, Oregon and the black and white square tiled floor in the visitor’s waiting room that looked like a giant checker game board. They did not allow children younger than 12 to visit the patient rooms. Therefore, I waited in the sterile smelling room for seemingly endless hours by myself because it was the closest I could get to my Grandfather. I remember begging my mother to let me come to the hospital with her. The sounds of the round black and white hospital clock ticked away time…time that would pass too quickly…time that I could not change.

Almost like a movie, I watched the last part of my Grandfather’s life on earth. He was there when my twin sister and I were born. Then he became sick when we were still quite young. The angels were waiting for him to come to heaven many times. The memorial service that I only saw through photographs years later came across the screen. Squeezing Jesus’ hand I choked through the painful emotions overtaking my being, “Was my Grandfather supposed to be here in heaven sooner?” Nodding, “Yes,” He continued, “His life was extended so you could have his memory with you during your life on earth.”

Embarrassment, shame and humiliation consumed me as convulsing sobs consumed my body at the feet of Jesus. HE was right. HE is Truth. As a little girl in the summer of her fourth grade, bitterness and anger had consumed me over my Grandfather’s death. Tormenting nightmares followed nightly without ceasing, for twenty years. Every dream was about someone I loved dying in a car wreck or through some form of terminal illness.

When I was finished crying years of stored-up bitterness, HE gently nudged me and said, “Someone is waiting to see you.”  Looking up, I could see my Grandfather standing not too far off. I jumped to my feet and ran enthusiastically to him.  First, I noticed that he didn’t walk with a limp.  Then I noticed the peace in his kind grey-blue eyes. And then I noticed that I had grown taller, my head now rested comfortably on his chest when we hugged.

Somehow, I thought I had to tell him everything that had happened in the last 20 years and I could not talk fast enough. Touching my shoulder, he chuckled and said, “I know.”  Astonishment overtook me.  “You know? You mean, you already know? You mean, without me telling you?” Smiling, he chuckled again, “Of course, I know.” This seemed completely impossible to me. Pressing him, “How do you know?” I insisted. Then he heartily laughed out loud and said, “Jennie, we are not dead, we are alive.  We are aware of what is happening with our families and friends” (Hebrews 12:1). Then it was I who laughed, although in my mind and thought process, I knew this to be true, I just never realized what it fully meant to live on the heaven side of life.

Hanging at his side was a stringed musical instrument like nothing I had ever seen.  Curiously, I reached for it and he loosened the instrument hanging from his belt. The belt had the appearance of a twisted golden rope (Psalm 92:1-4). “What is it?” I asked. “A worship instrument,” he responded as he strummed a few notes. He said that he wrote music for the worship angels and the heavenly choir. I remembered my favorite place on earth when he was alive on earth was sitting at his feet as he played the acoustical guitar. “Of course,” I thought to myself, “he is a musician, what else would he do here?”

“Are you happy here?” I asked him.

Pausing, he replied, “That is all one can be here.  We do not have sadness or tears.”  Revelation 7:16-17 teaches us, “They shall hunger no more, neither thirst anymore; neither shall the sun beat down on them, nor any heat; for the Lamb in the center of the throne shall be their shepherd, and shall guide them to springs of the water of life; and God shall wipe every tear from their eyes.”

Pulling me to his chest and hugging me tightly he encouraged me, “In a little while, we will all be together again. It won’t be that long, you’ll see.” (Revelation 21:4)

“Bumpa, I miss you so much.  There are so many times I just need to talk with you.  I need to know that you can hear me.  I need you to know where I am. I need you to be in my life.” I squeezed his hand tightly, not wanting to let go. There was a depth of understanding in his countenance that was beyond my ability to grasp.

Softly he said, “Love has no time, Jennie.” Then calling me by his special name for me, he said, “You are my Short forever.” The nickname was derived from a season in my life when my mother cut my beautiful, chocolate brown curly hair so short that I was mistaken for a little boy. At the time, he called me Short, hoping to make light of something that was very humiliating to me. Then, Bumpa stepped back indicating that it was time for him to go. Hugging him tightly, I told him that I loved him. He lovingly smiled, slowly turned, and walked away without limping.

Jesus was beside me now. Looking at HIM, I begged HIM with my entire being, “I want to stay here. Please say I can stay, I just simply cannot go back.” Yet, I knew by the look in His eyes, what His answer would be.

Gently taking my hand, we returned to our place under the giant sprawling tree. The branches provided a huge green protective canopy over us. The movie screen appeared again. I could see my three sweet little children at home, snuggled safely in their beds. Jesus revealed to me what was going to happen in the next few months. His message was something that my heart already knew but that my mind refused to accept. In the next few months, I would become a single parent through divorce. Living something I never believed possible in my own life.

Although, I was not able to comprehend everything that Jesus was showing me, there was a place inside of me that that trusted HIM completely. Being with HIM is so indescribably perfect, that I could only return to the earthly realm because of the depth of HIS unconditional love for me, and my deep trust for HIM. In HIS presence, I stayed for as long as HE allowed. Then the time came for me to return and I did as quickly as I came.

Not long after that, my children’s father chose not to be a husband or a father, which meant I became a single parent whether I wanted to or not. Even though I knew I was forgiven, for me, divorce was sinning against God. Somehow, at the time, it seemed worse than all other sin. The Holy Spirit has taught me to overcome, which is only available through God’s mercy and grace (Revelation 3:5). There are some things that are more difficult to write than others, this has been one of those things. Sometimes, obedience is uncomfortable at best.
For His anger is but for a moment, His favor is for a lifetime; Weeping may last for the night, but a shout of joy comes in the morning. Psalm 30:5