January 19, 2022 was my 71st birthday. I inquired of the LORD if there was something HE wanted to say. Thirty-six hours later, noting that HE does not wear a watch or a timepiece, the following evening at 9:14 PM, HE spoke, “I AM Bringing You Into a Season of White Peacocks.”

My first inclination is to acknowledge that I have always worshiped ELOHIM, Our Creator not HIS created beings. Clearly “white peacocks” were symbolic of a season resonating with the meaning of ~

White Light: Of the color of pure snow, reflecting nearly all the rays of sunlight or a similar light. Noun: A color without the hue at one extreme end of the scale of grays, opposite to black. A white surface reflects light of all hues completely and diffusely. Most so-called whites are very light grays: fresh snow, for example, reflects about 80 percent of the incident light, but to be strictly white, snow would have to reflect 100 percent of the incident light. Spiritual metaphors and applications: Favor, Loyalty, Wholesome, Purity, Light, Glory, Majesty, Wisdom, Joy, Angelic, Peace, Victory, Holiness, Surrender, Triumph, Righteousness, Unblemished, Heavenly, Harvest, Spotless, White Linen, Resurrection Power, Completed Work, Endures Crushing and Fire, Tribe of Gad, 6th Stone on Breastplate, 8th Gate. A sample of Biblical scriptures: Esther 1:6; Daniel 7:9; John 4:35; Revelation 1:14, 2:17, 6:2, 20:11, 21.

This was followed by a brief internet research which provided the following:

“Christian artwork, like paintings and mosaics, have used white peacocks to represent Jesus Christ. This is because the peacock is considered a symbol for death, resurrection and eternal life, which are concepts that are directly affiliated with Christ. The bird is also affiliated with such Christ-like attributes as royalty, glory and incorruptibility. Its white color represents his holy spirit.

The term "Christ consciousness" refers to enlightenment, which means that a person is aware of the thoughts and fears that are projected by his ego but doesn't accept them as his true state of being. Not only does the white peacock represent Jesus Christ, its color stands for awakening, spirituality and light, along with the purity of a person's intentions and his faith in God.”

My hope and prayer is that this will bless and encourage you in some way according to the Holy Spirit translating the message for you.

Thanks for sharing,  “I AM Bringing You Into a Season of White Peacocks.” A really great Word from YHVH for you. I hope you do not mind my thoughts, too.  I know White Peacocks are very rare and although rare, white peacocks can be bred from other white peacocks and will produce white peachicks if bred in captivity. Symbolizing In covenant with Yeshua. So white peacocks can easily be bred to produce white offspring. They would not be common in the wild!! Symbolizing outside of Yeshua. I think you have been this (in covenant with Yeshua) all along but now it will increase because there is a time now for "breeding" (new covenant relationships) at a new level, joining with other White Peacocks!! I am excited to "see" who HE brings into your life next.

It also reminded me that White = The Hebrew Letter Aleph, which represents
YHVH and Aleph is considered the highest vibration, Inasmuch as aleph is The Father principle, perhaps Aleph also represents a chord composed of all of the notes of the octave.

Here is the whole article:
When one looks at the musical scale, one realizes that there are eight notes in an octave.  These are composed of seven notes (A, B, C, D, E, F, G) and includes the first note of the next scale (A) so that it is ABCDEFGA.  The next octave overlaps with the last note of the previous octave and includes the first note of the higher octave.  Three (again, a trinity) of octaves would add up to twenty-two (22) notes as follows:    ABCDEFGA     ABCDEFGA   ABCDEFGA

So, let’s presume that these three octaves of notes correspond to the twenty-two letters of the Hebrew alphabet.  If aleph is considered the highest vibration, then that would mean that the last note would be assigned to aleph.  Inasmuch as aleph is the Father principle, perhaps aleph also represents a chord composed of all of the notes of the octave.  But before we construct the diagram, lets also consider colors.  The seven colors of the spectrum progresses red, orange, yellow, green, blue, indigo, violet.  Again, let’s take a trinity (three) of the color vibrations and assign them to the Hebrew alphabet.  Again, aleph is the Father principle and so would be the composition of all of the colors (white). Most know that a simple glass prism can be used to separate white light into its spectrum of colors.  White is a symbol of wholeness, purity, and reflection of light.  So, integrating color (vibration) and sound (vibration) into the Hebrew alphabet, here is what we get: 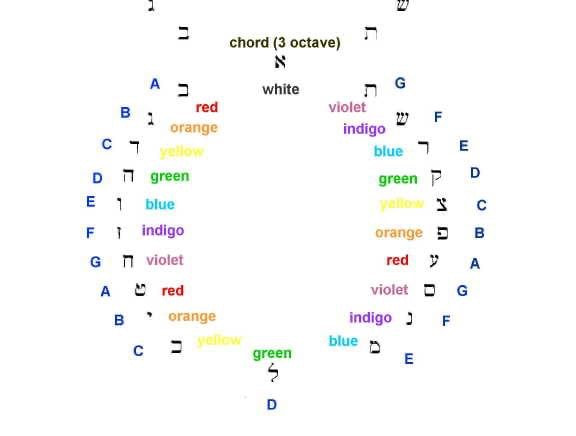 “I kept looking until thrones were set up, and the Ancient of Days took His seat; His garment was white as snow,
and the hair of His head like pure wool. His throne was ablaze with flames, its wheels were a burning fire."
~ Daniel 7:9, NASB