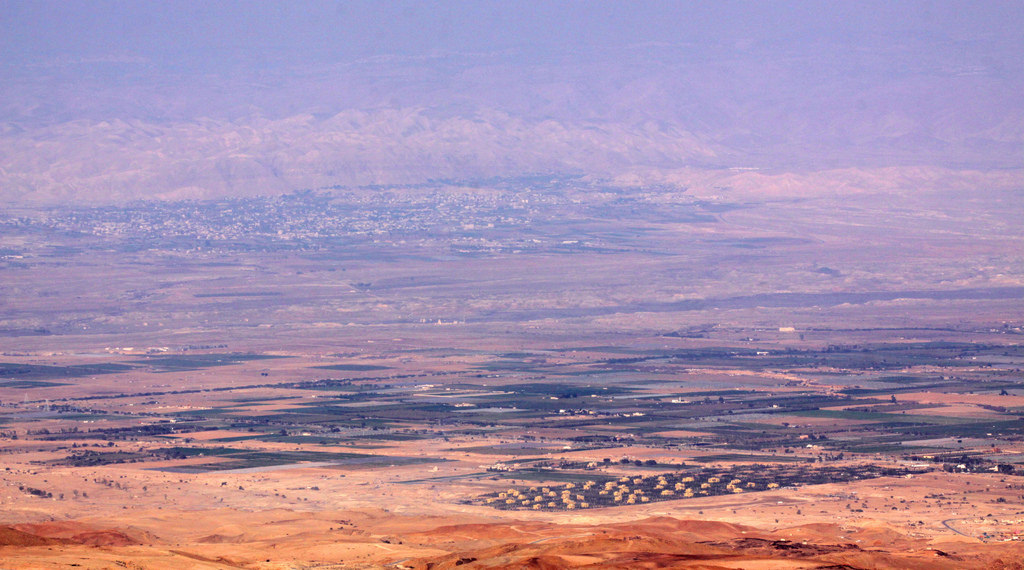 ​​©Jennifer Lynn Easton Joy​​​​​​​​​​​​​​​​​​​​ / שמחה איסטון לין ינייפר
​It is possible to interpret this teaching through more than one lens or perspective. First might be the lens of you as an individual and/or from the perspective of your family and/or possibly applied to your ministry or calling and/ or perhaps viewed through the lens of your community, city or nation. As always, it is wisdom to ask the Holy Spirit to translate the message for you.

1. Jericho – A City of Protection
As Moses finished his journey through the wilderness and released leadership to Joshua, Jericho was the chosen city of destiny. Deuteronomy 34:3 indicates that Jericho is across the Jordan River, due south in the valley.  Jericho is a city that is surrounded by walls, well guarded and known as the city of palm trees.

The word palm is translated to “tamar” in Hebrew. There are three women in the Bible with the name: Tamar. King David’s daughter was named Tamar.  Absalom’s named his daughter, Tamar after his sister. And Judah’s daughter-in-law was also named Tamar whose name is recorded in the lineage of YESHUA in Matthew 1:3. Where you finish has greater weight than where you began. What you do with the gifts that GOD has given to you is not only your personal choice, they may become your gifts to GOD!

2. Jericho – A City of Salvation
Before crossing over into the promised-land a team of twelve went to spy out the land and we are reminded of the familiar Bible story of ten men who saw giants and two men (Joshua and Caleb) who saw promise. It is about perspective. Do you see the promise, or do you see the giants? In Joshua 2:1, two men are sent into the city to spy secretly. They went to a harlot’s house and lodged there. Rahab’s family came to salvation through her willingness to serve ADONAI’s people. Matthew 1:5, places her in the lineage of YESHUA, as the mother of Boaz.

3. Jericho – A City of Promise
God not only decided the geographical location of the promised land, but also what would have to be accomplished to acquire it. Once again, God parted the waters so the people could cross over. Joshua 3:16 reads, “That the waters which came down from above stood and rose up upon an heap very far from the city Adam, that is beside Zaretan: and those that came down toward the sea of the plain, even the salt sea, failed, and were cut off: and the people passed over right against Jericho.” God always makes a way for HIS will. Always.

4. Jericho – A City of Warfare
It is not only wisdom, it is essential to cooperate with the plans of the LORD to walk in victory. Cooperating with GOD does not guarantee comfort and pleasure. Sometimes it requires warfare as Joshua 4:13 indicates that approximately 40,000 men prepared for war to walk in obedience to the LORD and willingly to go to battle on the plains of Jericho. Sometimes we must stand for truth! Sometimes we must use our voice and speak the truth causing others to take pause and listen. GOD holds us responsible for the action we take, for the words we speak, for the thoughts we think, and for our silence.

5. Jericho – A City of Deliverance
Joshua 24:11, “And you went over Jordan, and came unto Jericho: and the men of Jericho fought against you, the Amorites, and the Perizzites, and the Canaanites, and the Hittites, and the Girgashites, the Hivites, and the Jebusites; and I delivered them into your hand.” GOD will deliver the Victory in HIS Battles. Each of us has "ites" in our lives, however, it is not wisdom to strike up a battle without GOD’s protection, provision, providence, wisdom and leadership. GOD will provide a way to deliver you from any "ites" in your life. Ask HIM.

6. Jericho – A City of Foundations and Gates
After the city was taken and the enemy was destroyed, 1 Kings 16:34, tells us that the foundation was laid, and the gates were established. Every city of the LORD has a foundation and gates with YESHUA, Our Messiah as the Cornerstone of every foundation and the Keystone of every gate. The enemy must be destroyed before a stable, secure foundation can be put into place. Too often we ignore the enemy, pretend it doesn't matter, look the other way...the parable remains true...we all become like those we spend time with.

7. Jericho – A City of True Prophets
Elijah and Elisha came to Jericho. 2 Kings 2:4, “And Elijah said unto him, Elisha, tarry here, I pray thee; for the LORD hath sent me to Jericho. And he said, As the LORD lives, and as thy soul lives, I will not leave thee. So, they came to Jericho.” One characteristic of a true prophet is that he or she will not leave what the LORD has given them to do. They are truly tenacious beyond words. They stay on task longer than anyone else. They clearly hear the voice of GOD and walk in obedience no matter the cost. A true prophet never leads people to themselves but to YESHUA, Our Messiah. A true prophet will lead others to the will of GOD for their lives.

8. Jericho - A City of Miracles
Elijah was taken to heaven in the whirlwind of fire near the city of Jericho. 2 Kings 2:5, “And the sons of the prophets that were at Jericho came to Elisha, and said unto him, ‘Do you know that the LORD will take away your master from you today?’ And he answered, Yes, I know.” Are you one that believes in miracles, prays for miracles, expect miracles? Are you a walking miracle and testimony to the overt kindness of GOD?

9. Jericho - A City of Double Portion Anointing and Blessing
As Elisha had asked, he received the double portion mantle of Elijah. 2 Kings 2:15, “And when the sons of the prophets which were to view at Jericho saw him, they said, The spirit of Elijah rests on Elisha. And they came to meet him and bowed themselves to the ground before him.” It is important to note that Elisha asked. Sometimes receiving means asking GOD.

10. Jericho - A City of Believers
When YESHUA departed from Jericho, a great multitude followed him (Matthew 20:29). Who do you follow? Who is first in your life? Who is your leader? Whose voice are you listening to?

11. Jericho - A City of Healing
​There were many healed in the city of Jericho and Mark records in 10:46 that Bartimaeus, the son of Timaeus was healed. Do you anticipate the healing virtue of YESHUA will touch you and then touch others through you?

12. Jericho - A City that welcomed and received the Ministry of JESUS CHRIST
Luke 19:1 tells us that YESHUA ministered in Jericho at the home of Zacchaeus, the tax collector. The ministry of YESHUA included unconditional love for all. He did not mimic, agree or join their lifestyles, instead He gave them a choice to be transformed. He spoke the truth without apology.

13. Jericho - A City of Praise and Worship
As the walls came down in the days of Joshua and the people shouted and praised the LORD. Hundreds of years later people praised the miracles of YESHUA, Our Messiah. Do the walls come tumbling down as you Praise ABBA ADONAI?

Jericho was a few miles from Jerusalem. As YESHUA departed from Jericho, the next stop was Jerusalem and HIS triumphant entry before HIS last Passover, HIS crucifixion and Resurrection. John says in 12:13 that they took branches of palm trees, and went forth to meet him, and cried, "Hosanna: Blessed is the King of Israel that comes in the name of the LORD." Are you willing to wave a palm branch, a banner, a flag for the KING of kings?

14. Jericho - A City of Faith
Hebrews 11:30, proclaims that by faith the walls of Jericho fell down, after they were compassed about seven days. Faith is the persistent, tangible, diligent, consistent, optimistic belief that GOD will show up!

15. Jericho – A City of Destiny
Webster’s dictionary defines Destiny as
1. the seemingly inevitable or necessary succession of events
2. what will necessarily happen to any person or thing
3. that which determines events: said of either a supernatural agency or necessity.

“Blessed be the GOD and the FATHER of our Lord Jesus Christ, who has blessed us with every spiritual blessing in the heavenly places in Christ, just as HE chose us in HIM before the foundation of the world, that we should be holy and without blame before HIM in love, having predestined us to adoption as sons and daughters by Jesus Christ to HIMSELF according to the good pleasure of HIS will, to the praise of the glory of HIS grace by which HE made us accepted in the Beloved” (Ephesians 1:3-6, NASB).

The word predestined is in the Bible only four times and is defined as: to determine before, to ordain and to predestine.

These 15 characteristics of the City of Jericho may be applied to our personal lives, our families, our ministries, our cities, our states, and/or our nations. Do you possess the 15 attributes of the City of Jericho? If not, why not? How do you position yourself to be transformed by GOD? All the answers to your questions are found in the holy, sacred wisdom of GOD.