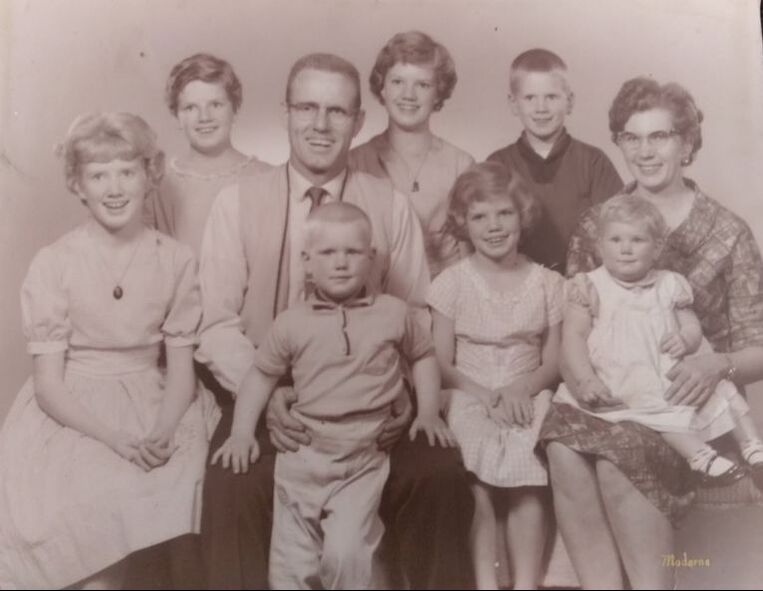 Left to Right: Susan, Jennie, Dad, Mark, Jeannie, Linda, Gerald, Elisabeth and Mom - Easter 1961. We were wearing our Easter dresses made by my grandmother. Susan in blue gingham, Jennie in pink, Linda in yellow and Jeannie in green.

January 18, 2014, Saturday ~ In the cold snowy winter of 2014, I was in Eugene, Oregon celebrating my most favorite aunt's 80th birthday. Affectionately, I recall my twin sister and I serving the groom's cake at her wedding.

An upscale local restaurant had been reserved for the joyous celebration of a life well lived as she was surrounded by family and friends. Colorful balloons and confetti decorated the establishment. The room was filled with the sounds of a delightful, fun-filled, happy celebration as people traveled many miles for this truly over the top occasion.

A friend from New York accompanied me, who was sitting directly across the table from me as my brother, sister-in-law and I were conversing. A man, whom I did not recognize at all, appearing to be in his seventies walked over to our table. He stood still for barely a moment, then extended his hand to me. Cordially, I introduced myself, my brother, sister-in-law and friend. He laughed heartily, "You don't remember me, do you?" I shook my head no that I did not. He laughed again, "How about the summer of 1961 right after your grandfather died?" Then he introduced himself proudly, and I realized I was looking into the face of my older second cousin, the one who molested my sisters and me the summer of my grandfather's death. He was clearly still quite proud of his actions. The friend traveling with me said that I turned "sheet white" and for a white English-Irish girl that is very white. My brother and sister-in-law left the table immediately. As I was shaken to the the core, I said to my friend that I needed to leave immediately. Making excuses to my aunt for the snow on the mountain pass and my very swollen post-operative feet as the reasons for our early, abrupt departure...before the cake was served, before the gifts were opened, before "Happy Birthday" was sung...

Over 50 years earlier my cousin and his parents came to our home in the most beautiful Mohawk Valley slightly east of Springfield, Oregon to attend a family gathering in memory of my grandfather who died July 6, 1961. We lived on a small 21-acre farm with an expansive one-acre organic garden, chickens, geese, and even some cows. A WWII Veteran, my dad worked at Weyerhauser as a lumber grader and my mom stayed at home with 7 children. It was then my cousin's predator pride began in our family and whenever his family visited, I was targeted. My mother laughed at me when I told her. After that I did not have the courage to tell my dad, as they were guests in our home, not to mention family.

My grandmother and mother talked my dad into taking over the family business, The Drive-In-Market on Highway 58 near Dexter, Oregon. So, a few months following my grandfather's death we moved to a new town, new church, new school and new house - I was just beginning the fifth grade. Gratefully, my cousin, who was four years older, and his parents lived in Grants Pass, Oregon which was a lengthy drive to our home and their visits were infrequent.

My cousin dubbed himself with the nickname of "Roger Ramjet" taken from a television cartoon in 1965, he would have been about 19 at the time. I learned to wear long-sleeved blouses to cover the bruises, even during the hot sticky, summer months. In time, I became very creative in protecting my younger siblings. The last time I saw my cousin was when I was in high school.

A true predator keeps a record of his conquests and is defined as a person that ruthlessly exploits others. My cousin was always very proud of his conquests. In the eight years following my grandfather's death, his visits meant more bullying, tormenting, and always bruises from being held captive. A predator usually preys on smaller and younger victims and often intentionally chooses opportune times such as a family crisis when those who would normally be protecting the innocent are preoccupied with other things such as in my family, the grief over my grandfather's death.

As in all things, I have found forgiving was easier than forgetting. Forgiveness is easier when one has experienced the pure love of YESHUA. And perhaps not forgetting is a holy designed protection system that beeps internally with a predator alert. I have learned that I cannot be responsible for another person's decisions. I am only accountable to God for my own.

May YHVH, EL ELYON, bring HIS justice and righteousness to the earth for HIS Eternal Glory!