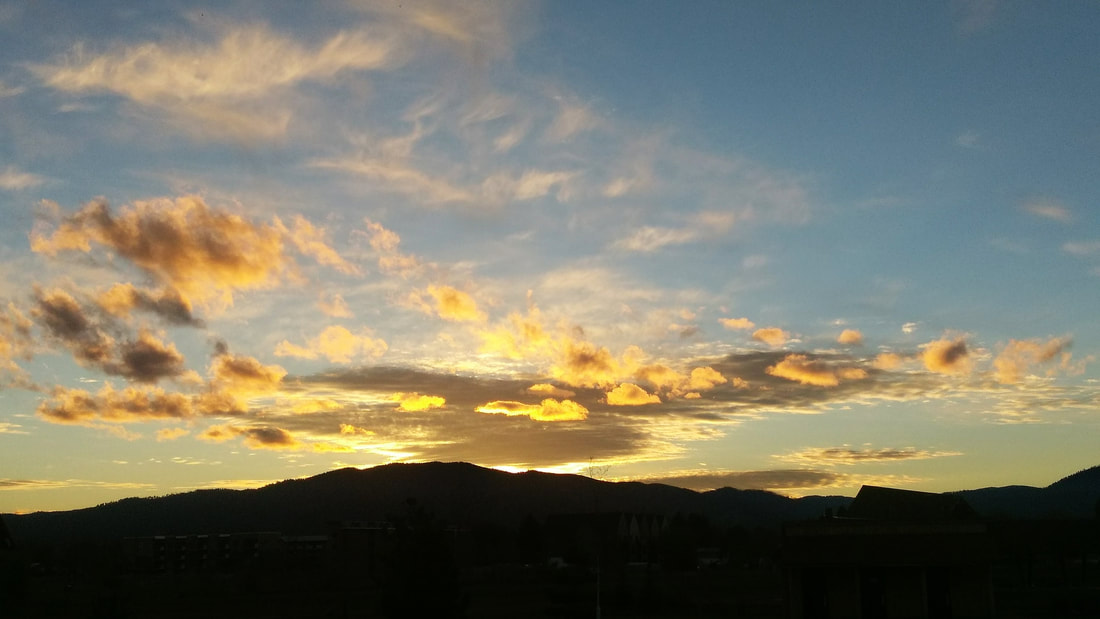 ​This is the third of four Journal of Joy that tell the story of the Prophetic Worship Flag Project 2016.

On October 29, 2016, Saturday, I made the final arrangements for this trip including stops in Missoula, Kalispell, and Thompson Falls, Montana then east to Colville, Washington to finish the next portion of the Prophetic Worship Glory Flag Project and the Prophetic Worship Victory Streamer for every State in America Project. One of my phone calls was to Katie Lou Rosenow in Kalispell, Montana. I had not seen her since February and was looking forward to seeing her again since she moved in with her daughter, in Kalispell. Two days later, Katie Lou went home to heaven, without a doubt dancing and singing all the way home. Of course, her joy is eternal life. Life on earth is much shorter and much more precious than we begin to realize or understand. It is wisdom to speak daily as if it is our last day to live…because it just might be.

November 4, 2016, Friday - I have been home for about 8 days since my journey to Tennessee, Kentucky, and North Carolina and find myself very much on their time table, awaking at 4:00 AM daily to pray. As always, I am trusting the LORD for the strength for this journey and thinking how lovely it might be to have a driver. However, about 10 hours later I arrive in Missoula. It is a beautiful, sunny day and the roads were clear sailing without road construction, delays, or challenges. For this I give thanks.

We attended the City of Missoula, First Friday Art Walk in the evening. At the Art Walk, a brochure, “2106-2017 Season – IN FULL COLOR” for the Missoula Symphony. It spoke prophetically to me. As we are spiritually in a season of full color, all the colors, the fullness of light, the fullness of prism, the fullness of HIS Covenant.
During this trip, two Prophetic Worship Glory Rings were returned to one of HGRM's intercessors. The State of South Dakota Prophetic Worship Glory Ring which I will take home and send to another intercessor. The City of Missoula, Montana Prophetic Worship Glory Ring will stay in Missoula. Gratefully, sometimes when an intercessor is finished with their season of intercession, they return the Worship Instruments to HGRM instead of discarding them or donating them to a local thrift. For this we give thanks.

November 5, 2016, Saturday ~ Still on Tennessee time, I arose at 4:00 AM to pray, then we headed south to the Bitterroot Valley to pray.

Under a cloudless, mild fall weather day, we prayed over Lolo, Corvallis, and Stevensville – all cities that we have prayed over before – then we drove even further south to Darby. Wherever the LORD sends me there are always cities, states, rivers, tribes, churches, schools, businesses, and people in need of prayer...some knowingly and some unknowingly.

During our treasure searching, I delightfully came across a Delaware-New Jersey Jim Beam Antique Bourbon Bottle for the States of America Anointing Oil Project - from “addicted to anointed” plus some amazing antique rose, forest green and mocha colored velvet ribbons to use on Prophetic Worship Glory Flags and Prophetic Worship Glory Rings. For this I give thanksgiving and praise to ELOHIM for HIS Abundant Provision.

November 6, 2016, Sunday ~ The time zone in my physical dwelling place shifted to PDT (Pacific Daylight Time), so I slept in this morning until 6:00 AM. My life belongs to GOD, to my time is always HIS time.

We drove up both sides of the Rattlesnake Wilderness Area (East and West Trails) praying and pouring Holy Anointing Oil, kosher salt and wine. Then we came home and worked on the Prophetic Worship Glory Flag project. I brought more remnant fabric pieces from home and then we went and purchased some decidedly prophetic fabric.

The afternoon held treasure hunting for Prophetic Worship Instrument supplies, anointing oil bottles and communion supplies. The LORD’s favor was clearly with us.  On the way, home we prayed over The Silver Park in Missoula near the Clark Fork River.

In the evening, we met a HGRM Intercessor for dinner at a local Mexican restaurant. It was a sweet time of fellowship.

November 7, 2016, Monday – In the morning, we designed Prophetic Worship Glory  Flags and I repaired/refurbished other Prophetic Worship Instruments, then went treasure hunting in the afternoon, pouring more Holy Anointing Oil, kosher salt and wine and praying over different strategic parts of the city of Missoula.

November 8, 2016, Tuesday – This morning held the daily stop at the local coffee roasters, then we drove to Mill Town State Park and the Overlook of the Bonner Dam. As my feet, could not do the trail, my traveling companion and her boisterous black lab, Paisley ran down the trail to take photos and pour Holy Anointing Oil. We drove through the extravagantly beautiful Pattee Canyon, Deer Canyon and Crazy Canyon praying and pouring Holy Anointing Oil along the way.

We came back to Missoula to pack the vehicles and headed north to Poulson, Kalispell and White Fish, Montana. The season has turned to intense intercession for me regarding the Presidential Election in America. This is the final place, the final mile of a marathon of intercession this year, known as the “HGRM 2016 America Prayer Journey” of 22 States.

We stayed in Whitefish at a hotel I could not recommend because of pornography hanging on the walls. We asked the staff to remove it. That was a first for me in many years of ministry. Then we went to Petula, a local restaurant/pub filled with Republicans for the Election Celebration. The food was extraordinary. A place we would highly recommend.

​November 9, 2016, Wednesday – I woke up at 3:21 and clearly something was launched in America. We met for breakfast downstairs, then I headed for North Washington, via Plains and Thompson Falls, Montana about 123 miles. I met Lyne, Dixie and Ron, HGRM Intercessors for a quick lunch in Thompson Falls then headed north through Sandpoint, Idaho…my first time on this stretch of road. The LORD was gracious in providing smooth travels without road construction, delays, vehicle issues and inclement weather. Praise God!

November 10, 2016 – Thursday, - Today, Constance and I made 30 flags. I measured, cut, ironed, and pinned fabric while she sewed. We have become more proficient in our process. It is good, and it is God. I will add adornments and flag poles when I return home in preparation for the final photography shoot. Giving thanks for this team effort as I feel GOD’s pleasure in the unity of HIS handmaidens. It is always my heart to invite others to join me which positions them in receiving a spiritual inheritance from sowing into HGRM and the advancement of God's Kingdom on earth!

In the late afternoon, I cut 154 ribbons for the Victory Streamers in preparation for tomorrow.

November 11, 2016, Friday, Veterans Day ~ Arising early, Constance continued sewing and I finished de-wiring the 154 ribbons and pinned them for sewing. The ribbons are the final portion of the “sewing portion” of the Prophetic Victory Worship Streamers for each State in America. All were cut, de-wired and pinned for sewing. We worked until after 10:00 PM, with certainty the task would be completed tomorrow.

November 12, 2016, Saturday –  In the morning, Constance finished sewing the Prophetic Victory Worship Streamers and then we went into town to get more supplies.

When I returned to Constance’s about 3:30 PM we literally just sat, visited, and shared the Glory of the LORD. We both know how amazing HE truly is by the transforming supernatural energy HE gives to us. We humbly stand in awe of HIS grace!

November 13, 2016, Sunday -  This morning I preached at N.E.W. Beginnings Church in Kettle Falls, Washington where I have been warmly welcomed before. The Holy Spirit arrived in full regalia releasing hope, joy, kindness, encouragement, healing, passion, favor, wisdom, counsel, and prophetic blessings as is HIS nature.

A small group of us gathered at a local’s favorite restaurant for a time of refreshment and fellowship. It was a sweet time in the spirit. The kindness of God was present in full living color.

In the late afternoon, I packed the car preparing for tomorrow’s departure. I am excited to be taking home the final piece of the Prophetic Worship Victory Streamers and looking forward to finishing this project and begin releasing the Prophetic Victory Streamers to intercessors throughout the States of America. 2016-2017 are clearly years of Victory in America!

Although the Prophetic Worship Flag Glory Project was not part of my agenda for 2016, it was the LORD’s and I am grateful that it is closer to completion. All in HIS time.

This evening displays the largest "Supermoon" since Israel became a nation in 1948. Only GOD! The heavens declare HIS Glory!

“The heavens declare HIS righteousness, and all the peoples have seen HIS Glory!” (Psalm 97:6, NASB).

November 14, 2016, Monday – Departing at 7:00 AM and arriving home at about 1:00 PM. I am grateful to arrive home early and have time to call for furnace repair as the duplex held no heat and winter nights have arrived.

“Now faith is the assurance of things hoped for, the conviction of things not seen!” (Hebrews 11:1, NASB).

Giving thanks to the faithful HGRM Intercessors who provide faithful prayer support. May GOD recompense your giving. For the Glory of YESHUA!
“You see that faith was working with his works, and as a result of the works, faith was perfected; and the Scripture was fulfilled which says, ‘AND ABRAHAM BELIEVED GOD, AND IT WAS RECKONED TO HIM AS RIGHTEOUSNESS,’ and he was called the friend of God”
~ James 2:22-23, NASB.
Psalm 133 ~ ~ Steven J. Armer, Composer (02.25.1954-01.21.2021)